Leadership Versus Series: Performance vs Behavior in Employee Management 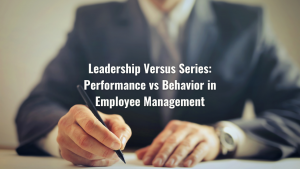 When it comes to employee management, why are some people forgiven while others are fired for issues at work? Utilizing a performance versus behavior approach answers the question with great clarity. I have found this to be one of the most valuable tools at a leader’s disposal in making decisions regarding retaining, retraining, reassigning, or letting someone go.

Let’s begin with definitions of performance and behavior as it relates to employee management. Performance is defined as the execution of an action. For me, performance is the level of quality and quantity that members of the team produce. High performance should result in high ROI.

On the other hand, behavior is simply moral and ethical character. It is a willingness to have the consideration of showing up on time every day with a great attitude and giving your employer and your coworkers your best effort. This great work ethic demonstrates a commitment to the team, not just compliance. In my experience, behavioral traits are developed throughout childhood and perhaps very early in one’s professional life, meaning people either show up with a great work ethic or don’t.

In employee management, performance and behavior can easily be broken down into 4 categories:

As leaders, high performance is what we notice more than anything else. High performance is great for ROI, which is the mission of most commercial enterprises. However, high performance can often mask low behavior. Low behavior is poison, it is a toxin that will spread throughout the organization, ultimately undermining the efforts of leaders. Low behavior takes many forms, you will know it when you encounter it, and you must address it immediately. I was blinded by a high-performing person early in my private enterprise experience. When I finally let this person go, a few others asked me what took me so long. I was also informed that others recognized the low behavior but thought I was giving this person a pass for other reasons. Several other smaller issues disappeared along with the person I fired. Eventually, a few other people loyal to the terminated employee left as well. This was a pivotal experience that significantly improved workplace conditions for everyone else on the team. So, under any circumstance, a low behaving person has to go.

What about the low performance, high behavior teammate? This is actually the most challenging of the four scenarios. As I mentioned earlier, a high behaving person is what employers should be looking for. Hire for behavior and train for performance. When it is apparent that one of your teammates is underperforming, it is the leader’s job to figure out why. We all have lives outside of work and sometimes one’s personal life can interfere with job performance. I recommend a candid discussion with the underperformer to get to the root cause…using the “five why” approach perhaps.

I once managed a US Navy Chief Petty Officer who began to underperform. Upon my questioning, we discovered that he had become very tired at work as of late and he did not know why. He would doze off at a red light on his way to work in the morning. Upon discovery of a sleep disturbance, I referred him to the appropriate medical professionals who discovered that he had the sleep disorder of sleep apnea.  After the underlying issue was identified and addressed, his high performance returned.

Sometimes, a high behaving individual has performance issues as the tasks they were hired to perform are simply beyond their capability. This is also a very difficult situation as high behavior is the gold standard for me. Almost anyone with great moral and ethical character has something to contribute to the team. When you have high behaving teammates who fall short on performance, you have three options:

As a one-time Officer In Charge of a Counter-Terrorist response team, I had to remove one of my men from an upcoming deployment due to a lack of technical skill. He was a great guy, liked by everyone, but when the stakes were high, he was unable to deliver at the level required to quickly and decisively identify and disable terrorist explosive devices, aka IEDs. (Improvised Explosive Device).

Having a defined structure is important in employee management because it allows you to be more objective in your decision-making and provides a level of efficiency in your leadership. How do your employees line up in these categories?

Come to our Free Leadership Skills Webinar at EYLWebinar.com.